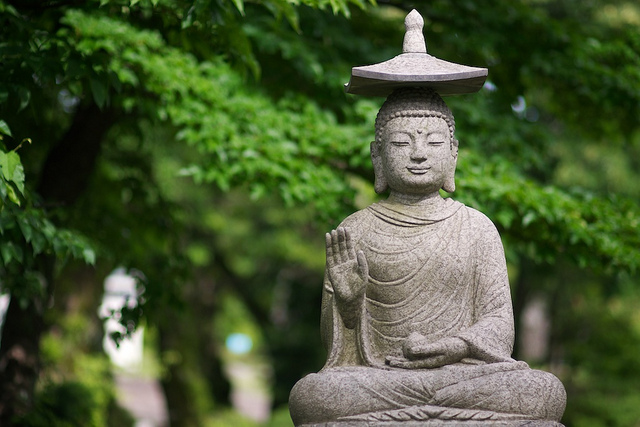 When the Buddha Wept Blood

There was once a village which flourished by the sea. It even had a port where not only fishing boats but also trading ships docked. Unfortunately, its residents became lazy and enjoyed nothing more than drinking wine and joking.

There was a kindly old woman who ran a small tavern near the waterfront. It was always packed with customers, so she made a good living.

One day, just after she opened the tavern doors to prepare for the first onslaught of customers, an old man in tattered clothes came into the tavern. “Excuse me, I can see you’re just opening, but do you have something I could eat? I’m very hungry,” he said very humbly.

The old woman could tell from his appearance that he could not pay, but she told him to sit down and she would get him something. She served him a large bowl of rice, a bowl of soup, a roasted fish, several side dishes and a bowl of rice wine.

The man ate hungrily, and when he finished, he wiped his mouth with his hand, stood up and slowly said, “That was very good. Thank you very much, but… I’m very sorry. I don’t have any money. How can I pay you?”

“Think nothing of it,” said the old woman. “You were hungry and I fed you. I was glad to be able to do it.”

The man didn’t move. He stared at the old woman’s face as though in a daze. Then he blurted out, “Let me tell you something important. Start preparing enough food to do you for four days and when that stone Buddha on the mountain in front of here weeps blood, take the food to the top of that mountain and stay there. If you don’t, you will surely die. I read it in your face.” So saying, the mane left.

The old woman did not question what the fortuneteller told her, but immediately began preparing food supplies. Several times throughout the day she climbed up the mountain to see if the Buddha was crying or not.

Thinking she should not keep this information to herself, she told the fortuneteller’s words to all the men who came into the tavern so that they could survive whatever catastrophe was to befall them.

The men only laughed and made jokes about “the crazy old woman.” Then, a man said, “Let’s play a trick on her. What do you say we…” The other men agreed and so that evening they went up the mountain and painted red tears on the stone Buddha.

The next morning, shortly after sunrise, the men went to the tavern. They banged on the door and shouted, “It’s happened! It’s happened! The Buddha is crying tears of blood!”

The old woman opened the door and shouted at the men, “You should get going! Quick! Head up the mountain!”

“We will,” said one of the men. “But first we have to prepare some food. You go on first.”

The old woman put the bundle of food she had prepared on her head and hurried off.

The men watched her go up the mountain until she was out of sight and then they went into the tavern.

Even though it was early morning, the men began to drink and laugh about the trick they had played on the old woman. They had emptied many jugs of wine when they suddenly heard a roaring sound. They threw open the tavern doors just in time to see a huge wave rolling toward them. In a flash they realized that the old woman was right, but it was too late.

The sea crashed down on the men, the tavern and everything around it. The whole village was swept away by the tidal wave and swallowed up by the sea. The old woman was the only survivor.

~ from the Korean Folk & Fairy Tales